The project area resides approximately 40 km southeast of Chapais into the Eeyou Istche/Baie-James territory of Quebec.
Most of the project area can be accessed from the gravel road linking the former Joe Mann Mine to the 167 paved road connecting Lac Saint-Jean region to Chibougamau.

The nearby towns of Chapais, Chibougamau and Oujé-Bougoumou provide facilities and workforce for exploration and mining development. The SE Claims Block is crossed by the high-voltage power line of Hydro-Québec. In 2020, the Anik project has been optioned to IAMGOLD as part of a 75% option for up to $6.5M work commitment and up to $3M in cash payments. Details of the transaction can been viewed in the press release below. 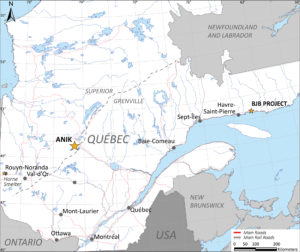 “We are very excited to have reached an agreement with IAMGOLD on the Anik gold project. Since its discovery in 2014 by our technical team, we have observed regional developments which have laid the foundation to create the next potential mining camp in Quebec.” Mr. Kiril Mugerman