Montreal, Quebec, March 24, 2022 – – Kintavar Exploration Inc. (the “Corporation” or “Kintavar”) (TSX-V: KTR), is very pleased to announce that it has signed a Letter of Interest (LOI) with Brunswick Exploration Inc. (BRW) to option out the Baie Johan Beetz (BJB) property on the North Shore of Quebec.

The LOI will serve as a basis to finalize the agreement as per the structure below. Subject to acceptance for filing of the agreement by the TSX Venture Exchange (“TSX-V”), BRW may earn up to an 100% interest in the BJB property.

“Just like the Wabash and Mitchi properties, the BJB project holds a significant polymetallic potential. Kintavar is very pleased to be working with BRW and their exploration team lead by Mr. Robert Wares who is responsible for several major mine discoveries in North America. This new lithium potential at the BJB property, on top of the copper and silver mineralization, further helps diversify our exposure to various precious and critical metals. Furthermore, it demonstrates the potential of the significantly underexplored Grenville geological province that Kintavar has focused on for the last 5 years.” commented Kiril Mugerman, President & CEO of Kintavar Exploration.

Kintavar Exploration is a Canadian mineral exploration Corporation engaged in the acquisition, assessment, exploration and development of gold and base metal mineral properties. Its flagship project is the Mitchi – Wabash copper-silver district (approx. 39 000 hectares, 100% owned) located 100 km north of the town of Mont-Laurier and 15 km East of the town of Parent in Quebec. Both properties cover an area of more than 300 km2 accessible by a network of logging and gravel roads with access to hydro-electric power already on site, major regional roads including railroad and a spur. The properties are located in the north-western portion of the central metasedimentary belt of the Grenville geological province. The projects primarily focus on sediment-hosted stratiform copper type mineralization (SSC) but include Iron Oxide Copper Gold (IOCG) and skarn type targets. Osisko holds a 2% NSR on 27 claims of the southern portion of the Mitchi property, outside of the sedimentary basin. Kintavar also has exposure in the gold greenstones of Quebec by advancing the Anik Gold Project in a partnership with IAMGOLD and several early-stage projects that were optioned by Gitennes Exploration.

Kintavar supports local development in the Mitchi-Wabash region where it owns and operates the Fer à Cheval outfitter (www.feracheval.ca), a profitable and cashflow generating operation where it employs local workforce. It as well works with local First Nations to provide training and employment. 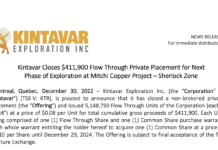 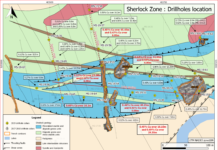 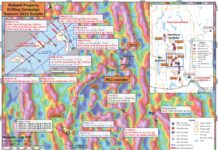